By J. P. Bruce October 30, 2021
I never knew or met Kevin O’Kelly but his was a familiar voice on Irish radio when I was growing up in the 1960s.
This short biographical piece was published in Scan Magazine in December 2015.
* * *
To his colleagues in RTE, Kevin O’Kelly was known affectionately as ‘Urbi et Orbit’. This was a pun on the Latin title of the Pope’s blessing ‘to the city and to the world’. It neatly encapsulated the two major events with which the newsman was associated during the 1960s. The first was his radio coverage of the ground-breaking Second Vatican Council. The other was his television commentary on the Apollo 11 Moon landing in July 1969. However, it is for an entirely different broadcast that Kevin O’Kelly is best remembered today. 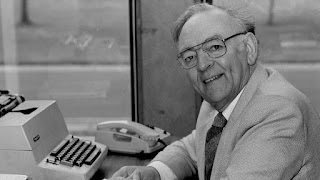 On November 19th 1972 he secured an interview with the head of the Provisional IRA, Seán Mac Stíofáin. At the time Mac Stíofáin was masterminding a relentless campaign of bombings and shootings against British forces in Northern Ireland. As he left O’Kelly’s home in Dublin after the interview, Mac Stíofáin was arrested by armed detectives. Although the journalist was worried that the IRA might suspect him of collusion in their leader’s capture, it seems that the Gardaí had been planning the arrest for some time.
Later that same day, Kevin O’Kelly revealed his scoop to the world by reading a transcript of the interview live on the lunchtime radio news programme. Because the government had banned broadcasts by anyone who advocated violence in pursuit of their objectives, O’Kelly could not play his own recording of Mac Stíofáin’s voice.
That recording became central to the State’s case that Mac Stíofáin belonged to an illegal organisation, but it needed to be verified by the interviewer under oath. However, when he was called as a witness during the trial, Kevin O’Kelly refused to breach what he saw as his duty of confidentiality as a journalist. The judge responded by sentencing him to three months imprisonment for contempt of court.
Meanwhile, despite the prosecution’s failure to deliver its crucial evidence, Mac Stíofáin was convicted of IRA membership and jailed for six months.
Regardless of Mac Stíofáin’s conviction, the government remained angry that his views had been broadcast on the national airwaves. So the Minister in charge sacked RTE’s governing board for failing to comply with his directives. TV and press journalists went on strike in support of their jailed colleague, briefly closing down RTE and several national newspapers. The crisis deepened when the IRA attempted to free their leader from Garda custody. A few hours earlier a bomb exploded in a Dublin cinema injuring dozens of people.
These were tense days and there would be many more during what we now refer to as the Troubles. But Kevin O’Kelly’s troubles ended when he was released from prison after two days in detention. He was only the second journalist in the history of the state to be imprisoned for refusing to disclose his sources.
Following his brief spell as a news story himself, Kevin O’Kelly resumed his role as a reporter and went on to specialise in religious affairs programmes for many more years. He died suddenly of a heart attack on 31st August 1994 and was buried in Shanganagh cemetery.
Mac Stíofáin Seán O’Kelly Kevin