For a week or two during April 1966 Ireland paused to mark the 50th anniversary of the Easter Rising. The jubilee commemorations were everywhere: newspapers, cinema, TV. Even the bus shelters displayed large posters of Patrick Pearse and the other leading revolutionaries.

I don’t recall being taught very much in school about the Rising. It was not a topic we discussed at home either. But through a plethora of parades, pageants, and prayers for the patriotic dead, we were given a rapid induction into the bloody origins of our country.

Being confronted with the details of that pivotal week in recent Irish history was a bit of a shock. Gay Byrne summed up the mood of us Dubs, if not the rest of the country, when he wrote of leaving “school at 18 having been told nothing whatever about this period”. His solution?

I would make it obligatory on all citizens between the ages of 14 and 28 to gaze upon the programmes being put out by Telefis Éireann all this week, dealing with 1916.[1]

Not quite 14 (and voluntarily) I watched those programmes, particularly Insurrection. This was the centrepiece of Irish television’s contribution to the jubilee: a big-budget production dramatizing the events of half-a-century earlier.

It was riveting stuff. Several scenes stand out in my mind: English lancers on horseback charging down O’Connell Street towards the waiting rebels, Pearse, played by Eoin Ó Súilleabháin, standing alone inside the burning GPO just before the final evacuation. But most stirring of all was the episode dealing with what is known today as The Battle of Mount Street Bridge. 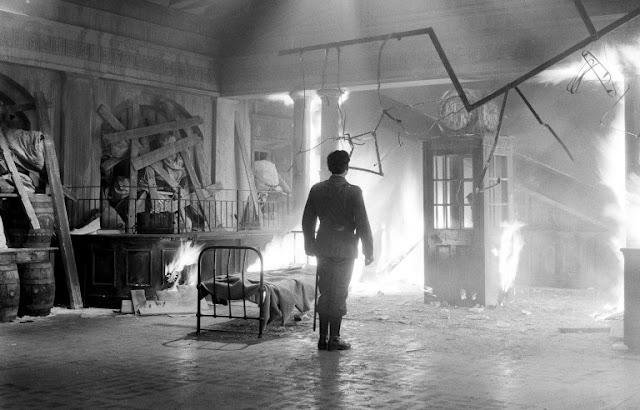 As a large battalion of British troops marched along Northumberland Road they were fired on by a dozen rebels occupying nearby buildings. One hundred and sixty soldiers were left dead or wounded on the road leading to the bridge.[2]  Telefis Éireann’s depiction of the plucky Irish inflicting a bloody nose on mighty Britain filled me with pride in my country.

It was not clear as I watched Insurrection that the men who shot so many British troops that day in 1916 were under the command of Éamon de Valera. He might not have been directly involved in what has been referred to as the “Irish Thermopylae” but de Valera was ultimately responsible for the most successful single rebel engagement of the Rising.[3]

Fifty years later those young volunteers of Easter 1916 were now aged veterans. Although many of them participated in the jubilee commemorations around the country, only one took centre stage. When Pearse and his comrades were executed by the British, Éamon de Valera became the most senior survivor of the Rising’s leadership.[4]  In 1966, as president of the republic, de Valera issued his message to the nation expressing what he understood to be the thinking behind 1916.

Political freedom alone was not the ultimate goal. It was to be, rather, the enabling condition for the gradual building up of a community in which an ever increasing number of its members, relieved from the pressure of exacting economic demands, would be free to devote themselves more and more to the cultivation of the things of the mind and spirit, and so be able to have the happiness of a full life.[5]

Ireland in 1966 was at last experiencing something of the prosperity that had eluded the country during the decades of economic deprivation following independence. The degree to which our impoverished state was a result of de Valera’s influential role in Irish public life is debated to this day.[6]  In any event few of those who heard or read his jubilee message can have been as interested as he was in “the things of the mind and spirit”.

The people were caught in a dilemma between two contradictory attitudes. On one hand they admired the selfless sacrifices made by the heroes of 1916. On the other hand their own self-interest demanded that the economic success they were enjoying should continue and grow. As one newspaper editorial put it:

1916 and its aftermath… should become part of the honoured and unforgotten past… inspiring us without dividing us, remembered by us but not obsessing us. It is time for other things.[7]

These “other things” were necessary because, as the paper reminded its readers,

to-day’s world is practical, vigorous, competitive and in a hurry. The danger is that we may get out of step.[8]

As he presided over the Easter Rising commemorations, perhaps it dawned on de Valera that it was he who was “out of step” with the people.

Back then I was not bothered by such things. And I was not even conscious of another anomaly in my own situation.

Every week I devoured the stories of British derring-do in my Hotspur comic magazine. Yet the soldiers I silently cheered on as I read about their exploits during World War II were part of the same army I watched being shot to pieces in Insurrection.

[6] Tom Garvin in Preventing the Future: Why was Ireland so poor for so long (Dublin 2004) wrote that de Valera’s “strange anti-economic economics informed much of [government party] Fianna Fáil’s thinking for a long time.” Fanning has argued that Ireland’s economic woes were largely due to external factors outside the control of any Taoiseach and that de Valera’s long tenure at the top provided stability during a time of international volatility. (Will to power, pp. 268-9).