In a series of posts last year I wrote about the pushback against international pop music led by Seán Ó Riada. If the wizard from Cork masterminded the counter-revolution, one of his ablest lieutenants was Peadar Mercier.

This tribute to Mercier was published in Scan Magazine in October 2014.

Irish traditional music found a global audience when Riverdance exploded onto the stage of Dublin’s Point Theatre during the interval of the 1994 Eurovision Song Contest. The Riverdance phenomenon marked one of the highpoints of a modern renaissance of Irish music that began only three decades earlier. And if one man could be said to have started that renaissance, it was Seán Ó Riada.

During the 1960s he gathered around him a small band of musicians, known as Ceoltóirí Chualann, with whom he hoped to recreate the authentic sound of an ancient Gaelic culture. Among the band’s members were Paddy Moloney, Éamon de Buitléar, Seán Ó Sé and bodhrán-player, Peadar Mercier.

Peadar Mercier first became interested in the bodhrán when he heard it played during a performance of John B. Keane’s play, Sive. Under Ó Riada’s guidance he soon mastered the instrument and, following his stint in Ceoltóirí Chualann, he was asked to join The Chieftains. It may seem hard to believe now, but during their early years together, The Chieftains were not professional musicians. Back then, playing traditional music was neither fashionable nor lucrative. So in order to feed and clothe his large family Peadar Mercier worked by day as a construction foreman. Yet, despite their amateur status, Peadar and his colleagues defined the sound of Irish traditional music for generations to come. 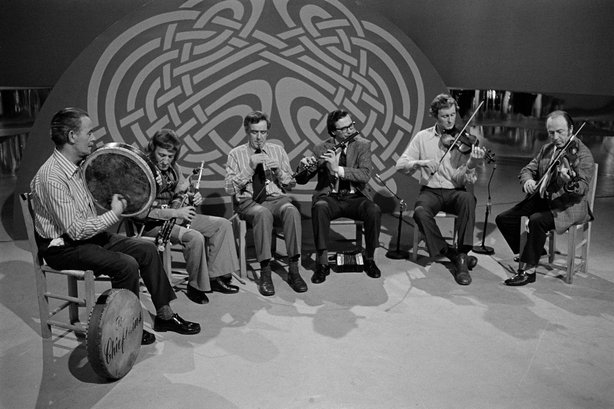 Between 1969 and 1975, Peader Mercier played on four of The Chieftains’ albums. On The Chieftains 2 (1969) the rolling rhythm of his bodhrán brings to life the stately procession of ‘Brian Boru’s March’. In the following selection of polkas he lets his hair down with some rapid-fire playing on the bones, another traditional percussion device.

As the band toured and recorded throughout the late-sixties and early-seventies, their reputation grew at home and abroad. The release of The Chieftains 5 in 1975 introduced them to a new, young audience for whom Irish traditional music was becoming trendy. Fame and fortune beckoned. Stanley Kubrick wanted The Chieftains to record the soundtrack to his new film, Barry Lyndon. Pressure mounted on the members to turn professional. Now in his sixties, Peadar Mercier decided to call it a day just as The Chieftains were about to hit the big time.

Following his ten-year spell in the public eye, Peadar Mercier became a father figure to a new generation of traditional musicians. He taught Malachy Kearns the techniques of bodhrán-making, which involves stretching goatskin across a circular wooden frame. Kearns is now the leading Irish manufacturer of the instrument, supplying a range of performers from Christy Moore to the Riverdance musicians. Which brings us full circle.

Always a modest man, Peadar Mercier spent the last fifteen years of his life away from the limelight. Perhaps unsurprisingly, his death on September 6th 1991 attracted little attention outside his family circle. He was buried without fanfare two days later in Shanganagh Cemetery. In this, the centenary of his birth in 1914, he deserves long overdue recognition for his part in restoring our rich musical heritage.