In 1997 I had the pleasure of meeting Albert Reynolds. I will always remember his down-to-earth nature and generous spirit. This article examines the origins of the can-do approach that brought him to the top of Irish politics. It was first published by Scan Magazine in January 2016 under the pseudonym "Gabriel Conroy".

‘It’s impossible to explain to people today the kind of hysteria generated by the showbands.’ These are the words of Father Brian D’Arcy as quoted in Send 'em Home Sweatin', Vincent Power’s excellent account of this peculiarly Irish phenomenon. As young people throughout the world were driven wild by Presley-mania and then Beatlemania, Irish youth were no less excited by the home-grown equivalents. Every week thousands of eager fans travelled for miles to hear showbands like the Clipper Carlton, the Royal and the Miami.

In the early days the dancehalls were awful, sometimes without even basic amenities like electricity. Spotting a golden opportunity, two brothers from Roscommon named Jim and Albert Reynolds built a modern ballroom in their home town of Roosky. Within a few years they were running a chain of ballrooms stretching from Clones to New Ross. These had proper facilities like heating, changing rooms for the performers, and polished floors for the dancers. 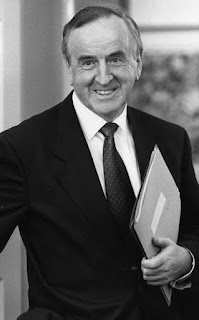 Of course Albert Reynolds is best known today for his political career. However, the foundations of his later success were laid three decades earlier during his time as a ballroom magnate. He operated according to a few simple principles: treat the customers and acts well, and honour all commitments.

So instead of the usual mangy sandwiches, the bands Reynolds booked were given a hot meal when they arrived – sometimes cooked by his mother - with a crate of beer left in the dressing room after the show. Deals with showband managers were done on a handshake in the hope that enough customers would arrive to make the evening profitable. But Reynolds always paid the agreed fee to the band, whether the turnout was two or two thousand.

Above all, Albert Reynolds was a risk-taker. When he booked a little known British trumpeter for a tour he was not to know that, by the time he arrived, Kenny Ball would have topped the charts with ‘Midnight in Moscow’. As a result the halls were packed and Reynolds made a tidy profit. But it could also go the other way. He offered a large sum to entice singer Jim Reeves to Ireland. However, the shows had to be cancelled at the last minute due to the death of Pope John XXIII. Fortunately, Reeves waived his fee and Reynolds was saved from financial disaster.

As a government minister, and later Taoiseach, Albert Reynolds brought his business experience to bear on the political issues of the day. This meant taking risks that were not only personal, but potentially significant for the nation as well. And when they worked out, such as in his handling of the Northern Ireland peace process, the benefits were enormous.

A few days after Albert Reynolds’ death on August 21st 2014, Father D’Arcy celebrated his funeral Mass at the Church of the Sacred Heart in Donnybrook. Before the cortège left for the journey to Shanganagh Cemetery, Fr. D’Arcy bid his old friend farewell: ‘Albert, may you enjoy eternal peace. May you rest in peace. You were a man of peace.’