Regular readers of Na Seascaidí will know that these posts are about my memories of life in the 1960s. I supplement my recollections of people and places with research that fills out and contextualises these snapshots of life back then.

Examples are my articles on John F. Kennedy and Jimmy Savile. My personal connections to these men were tenuous to say the least. I saw both of them from a considerable distance while they were receiving great acclaim in a public space. But those memories were vivid enough to push me into a deeper exploration of the culture that spawned such influential celebrities.

But what about the more intimate and personal side of my character? Is it possible to bring back into focus an accurate or authentic picture of the kind of person I was more than half-a-century ago? Is my young self retrievable at all? Maybe it’s true that, as a famous novelist once wrote, “The past is a different country: they do things differently there”.[1] Was I a different person then?

These thoughts were prompted when I came across a letter I wrote in 1969. The letter was printed in a national newspaper, and was probably my first published piece.[2]

Perhaps it is to do with my generation, but I remember being thrilled to see my name in print. That is no longer a source of pleasure or pride today. After all, computers and printers are in practically every home. But back in the 1960s, to have your name printed in a newspaper was a rare privilege.

The subject of my letter was UFOs, or Unidentified Flying Objects, otherwise known as Flying Saucers. My letter was one of several on the subject printed in the same newspaper. When I re-read it I was struck by the cogent language and moderate tone. I might have been discussing something as banal as the likelihood of snow next Christmas. Yet this was a topic that touched on the very nature of the world and our place in the universe. 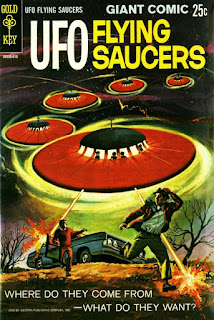 In the letter I referred to a report by two policemen who had chased a UFO in their squad car:

I have absolutely no idea why this phenomenon occurred. I will leave it to wiser and better people to answer it.[3]

Such a careful response. I can only assume that my desire to be published overcame any urge I felt to wax lyrical on a subject that fascinated me. Did I calculate that a letter couched in sober terms, even if the topic itself aroused cynicism and mirth in the minds of many, would be taken seriously by the editor? If that was my thinking it must have paid off because my letter was published.

At that time, and right up to the present day, the subject of UFOs was generally treated with scepticism. A typical example is a US Air Force investigation into UFOs conducted in the late-1960s. The members of the Condon committee concluded in their report that the topic was not “a fruitful field” for further investigation.[4] The message that there was ‘nothing to see here’ was reinforced by the media. One commentator wrote that “all flying saucer stories must henceforth be swallowed with a large grain of salt”.[5]

But the establishment’s disdainful attitude now seems to be changing. A more sympathetic view of the UFO phenomenon is evident in recent remarks by military, media, and political sources in America, among them former president Barack Obama.[6]  During a television appearance last May, Obama took quite a different line to that of the 50-year-old Condon Report:

What is true, and I'm actually being serious here, is that there are, there's footage and records of objects in the skies, that we don't know exactly what they are. We can't explain how they moved, their trajectory. They did not have an easily explainable pattern. And so, you know, I think that people still take seriously trying to investigate and figure out what that is.[7]

Does this mean we are on the brink of some official revelation about the extra-terrestrial origin of UFOs? Will we be told that the aliens on board are hostile towards us, like those in the movie, Independence Day? Or will we be presented with the more benign little grey men imagined by Steven Spielberg in Close Encounters of the Third Kind?

Would my teenage self have been excited at the prospect of finally getting answers to his questions about UFOs? Possibly. But that reference to “wiser and better people” makes me wonder.

I don’t claim to be either “wiser" or "better” now. But one of my longheld convictions has, if anything, been strengthened over the last 18 months. I now take establishment rhetoric on anything “with a large grain of salt”.