In an earlier post I described the first time I heard the Beatles’ “I Am the Walrus”. Wow! It made me realise that the B-side of a single could be better than the A-side.

In those days, singles were released on a 7-inch vinyl disc. There was a song on each side but the A-side was the one the radio DJs played. In late-November 1967 the Beatles released “Hello, Goodbye”, a catchy pop song sung by Paul McCartney that gave the Beatles their fourth Christmas number 1. However the B-side was much more interesting I thought.

Because the lyrics of “I Am the Walrus” included the word “knickers”, some radio stations refused to play the B-side at all. That’s probably why I heard it for the first time in a dance hall. The lyrics were nonsensical but George Martin’s musical arrangement, particularly the chanting chorus, created a sense of mounting tension that I found mesmerising. 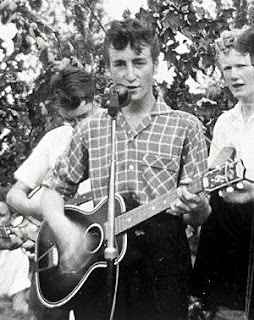 John Lennon took the lead vocal on “I Am the Walrus” and from then on I began to associate him with the more complex and less “poppy” side of the Beatles’ recordings. Unlike most of his showbiz contemporaries, Lennon himself was often reflective and refreshingly outspoken.

In a press interview published in March 1966, he expressed his dissatisfaction with being a Beatle:

You see, there's something else I'm going to do, something I must do… All I know is, this isn't it for me.[1]

My life with the Beatles had become a trap.[2]

As a youngster lapping up the Beatles’ music I had no idea that John Lennon was disenchanted with the group that had made him rich and famous. In particular I was unaware of the huge controversy that almost derailed the Beatles upward trajectory. The trigger was another comment he made during that 1966 interview:

Christianity will go… It will vanish and shrink. I needn't argue about that; I'm right and I will be proved right. We're more popular than Jesus now; I don't know which will go first -- rock 'n' roll or Christianity.[3]

For a lot of people at the time, Lennon’s remarks smacked of hubris and arrogance. When his comments were circulated in the USA later in the year during a Beatles’ concert tour, they caused a furore. In some American states, radio stations stopped playing Beatles’ songs. The group’s records were publicly burned. Boycotts were threatened. The Vatican denounced the Beatles for their profanity.[4]

But were Lennon’s remarks misinterpreted? As he also said in that controversial interview, he believed there was a distinction between Christianity and Christ.

Jesus was all right but his disciples were thick and ordinary. It's them twisting it that ruins it for me.[5]

Later on he wrote:

The separation of the church and Christianity was one of my earliest memories.[6]

He was referring to the contradictions he observed from childhood between institutional religion – in his case the Church of England - and what he understood to be the essence of Christ’s teachings.

As he reflected later in New York:

[Christians] are so busy condemning themselves and others, or preaching at people, or worse, killing for Christ. None of them understanding, or trying in the least, to behave like a Christ.[7]

Throughout his time as a Beatle, John Lennon played his part as a leader of the cultural revolution against the old order. A significant component of that old order was Christianity as represented by the various religious institutions, including the Roman Catholic and Anglican churches. But even then, Lennon displayed a more nuanced attitude towards religious faith than his fellow Beatles.

When, during an interview with the four, Paul McCartney declared that “none of us believe in God”, Lennon quickly qualified his partner’s remark:

We're not quite sure 'what' we are, but I know that we're more agnostic than atheistic.[8]

When he asserted that the Beatles were displacing Christianity, I don’t believe that Lennon was bragging. On the contrary I think he was issuing a warning, one tinged with regret for being on the “wrong side” in the war against Christianity, against God.