Anyone who has followed my posts will know that as a young boy I was quite religious. This is not to suggest that I was in any sense “holy” or even “good”. I was merely following the common pattern of life in inner-city Dublin of the early-1960s. This was just before Vatican II got rid of many of the devotional practices then popular with ordinary Catholics.

The churches were open all day long and people came and went to pray quietly, light a candle, or sit in silence before the altar. The stillness inside a church building was a refreshing antidote to the clamour of the world outside. Whenever I visited a church it was like stepping across the threshold that separated the mundane from the divine.

In my corner of Dublin there were lots of Roman Catholic churches within walking distance of our council estate. About a half-mile away was St James’s, our local parish church, where I served Mass for several years during the 1960s.  Another half-mile further on was the Liberties, a working-class district on the fringe of Dublin’s city centre. This is one of the oldest parts of the city, combining the tiny terraced houses of the Coombe and Pimlico with the bustling shops of Thomas Street.

Encompassed within the boundaries of the Liberties were several fine church buildings, most notably the Protestant cathedrals of Christ Church and St. Patrick. There were many more Roman Catholic churches, which all seemed to flourish even though they were situated only yards apart from each other. Some were run by the archdiocese, such as the parish churches in Meath Street and Francis Street, while others were in the stewardship of religious orders who answered to no one below the pope.

The Franciscan order managed the Church of the Immaculate Conception on the banks of the River Liffey. This church was known colloquially as Adam & Eve’s after a tavern that once stood in the same spot. If this religious house had a rival for the affections of local Catholics, it was the Church of St. Augustine and St. John on Thomas Street. We knew it simply as John's Lane Church.

I loved going to John’s Lane. To the right of the main altar was a shrine to Our Lady of Good Counsel. The centrepiece was an image of a mother holding her son close to her. It was a replica of an Italian painting from the Middle Ages depicting the Madonna and child. I did not know that at the time. I just liked looking at this picture of a woman doting on her baby. So I went there a lot. 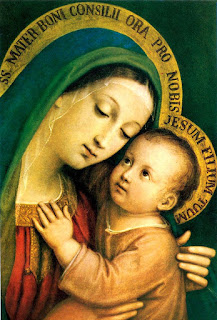 One of those visits stands out in my memory. It must have been 1963 or 1964, probably during the summer holidays because I was not in school that day. The weather was good enough for me to make the 15-20 minute journey from my home on foot.

As I was leaving the church after spending a little time at the shrine, a strange thought entered my head.

Imagine if you were to live your life according to God’s Will.

It came out of nowhere and I was thrown off guard. Whatever worries had been occupying my 10-year-old mind that day, I don’t believe that was one of them. But I could not help thinking about it, and I found the idea frightening and even repulsive. The prospect of submitting to the Will of God was like contemplating a life sentence inside a prison cell. I imagined God as a capricious tyrant who would treat me as his plaything.

As I stepped onto the pavement outside the church, both these thoughts: the question and my immediate response, passed through my mind in a flash. I suddenly felt panicky, as if I had to run fast from an invisible danger. I needed to stay free! For some reason I turned left towards the city centre rather than take a right to where I lived.

Only a few other sharp memories from those far-off days remain in my mind. But they are mostly to do with big events that anyone might recall, like the Kennedy assassination or the Apollo 11 Moon landings. This was different. This was deeply personal. And it had happened inside my head. Yet it left a lasting impression on me.

Was it a waking dream – or a nightmare? Where did the thought come from - my imagination or outside myself? If it sprang from some external source, did it have my best interests at heart or was it trying to scare me? Was it connected in some way to Our Lady of Good Counsel to whom I had just been praying (although not for that)? What if I had said “yes” instead of “no”?

These are some of the questions I have mulled over in the years since then. I am not sure if I am any the wiser now. But I do know one thing. My life was never the same after that day.