As I left John’s Lane church all those years ago, why did the thought that passed through my mind fill me with horror? Why was the idea of obeying God so dreadful? Was it because of who I imagined God to be?

In my limited understanding as a 10-year-old boy, God was a man. That much was apparent when I read my Catechism. The male pronoun, He, was liberally used in the opening section dealing with God’s infinite traits. But the various prayers I had learnt by then muddied the waters somewhat. Three in particular come to mind.

The Lord’s Prayer begins with the words, “Our Father”. Clearly that prayer is addressed to a male figure. However, the second prayer, the Hail Mary, is directed at Jesus’ mother, evidently a woman. The third, formally known as the Doxology but we knew it as the Glory Be, is a prayer to the three persons of the Blessed Trinity: the Father, Son, and Holy Ghost. The first two were obviously male. The third, the Holy Ghost, was represented as a dove in one of the illustrations in my Catechism. Was it a male or female bird? No idea.

According to the Gospels the Lord’s Prayer was composed by Jesus Christ. He would have been taught to perceive the Hebrew God, Yahweh or Jehovah, as a male father figure. Hence his prayer to “Our Father”. My Catechism explained it thusly:

We call God our Father, because He gave us life and provides for us with fatherly care.[1]

But where did this leave Mary, Jesus’ mother? Surely she gave Jesus life having carried him in her womb for nine months? And the shrine I often knelt at in John’s Lane church depicted the love Mary felt for her baby son. Was the scene in that picture of Our Lady of Good Counsel not the very essence of motherly care?

Undoubtedly I was drawn to that feminine image. Whether or not Mary was in some sense an aspect of God never occurred to me. But when the thought of God entered my mind, I saw, not the image of a kind mother, but of a stern man, a man from whom I could not get away fast enough.

Many years later, as I was researching the early life of broadcaster and writer Brian Cleeve, I came across an interesting insight into his thinking as a boy. During the 1930s Brian was a pupil at an expensive, and “fiercely religious”, boarding school in England. It was expected that, when they reached the age of 14, Brian and his schoolmates would be confirmed in the Anglican faith.

But Brian was already displaying the independence of mind that would frequently put him at odds with authority. Even at this young age he did not subscribe to some of the tenets of Christianity he would be obliged to uphold in the Confirmation ceremony. 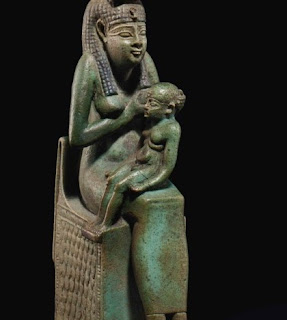 Perhaps through his reading – he consumed books voraciously – Brian had learnt of the cult of the Egyptian goddess Isis. She was the mother of Horus, the son whom she nurtured and protected. Prior to the onset of Christianity, the cult of Isis spread across Europe, from Sicily to Britain. Isis was revered by her followers as “a universal mother goddess”. Her influence may have continued into the Christian era through representations of the Madonna and Child, which some believe were influenced by the imagery of Isis nursing Horus.[2]

Something about the feminine nature of this deity evoked a strong response in Brian’s soul. He proclaimed that he worshipped Isis and was determined not to be confirmed as an Anglican. Although eventually he was compelled to relent, Brian identified this episode as the first sign of his rebellion against what he called “masculine Christianity”.

Unlike Brian, I never as a child objected to the formalities of Catholic ritual and practice. On the contrary I embraced them enthusiastically. But that was not the only difference between us. My visceral reaction outside John’s Lane was rooted in fear, not gritty resistance to the exclusively male God of Christian orthodoxy.

Yet somehow that moment marked the beginning of my own long journey towards a better understanding of God - not as either male or female - but as encompassing both sexes in a divine harmony that we humans may one day try to emulate.