By the time I started my solo visits to the pictures Cinerama had arrived in Dublin. Cinerama was the last word in movie-going. Instead of passively watching a film, you were plunged straight into the action. Cinerama achieved this illusion through a combination of the widest screen ever, and a multi-track system that filled the auditorium with sound from every direction.

Cinerama was one of several technological advances that gave us a peek into a future that has yet to materialise. For instance there is nothing today like a Concorde plane that nearly 50 years ago could transport passengers across the Atlantic at supersonic speed. And, for all the hype, Imax cannot match the wonder and excitement of the Cinerama experience.

My first Cinerama film was How the West Was Won in 1964. A terrific movie but, dare I say it now, a rather one-sided perspective if you happened to be a descendant of the Native Americans who already occupied the “West” before the Europeans arrived? But at the time I was enthralled by the epic story and Alfred Newman’s great score. The film also used the new technology to stunning effect, especially in those scenes depicting the frontier landscape in all its rugged grandeur.

Over the next few years I became an aficionado of the Cinerama experience, revelling in the spectacle of It's a Mad, Mad, Mad, Mad World and The Greatest Story Ever Told. So when 2001: A Space Odyssey arrived in Dublin during the long school break of 1968, I hopped on a bus to see one of the first showings at the Plaza in Parnell Square. Nothing in my young life (as a cinephile or otherwise) could have prepared me for what I saw when the lights dimmed and the curtains parted. 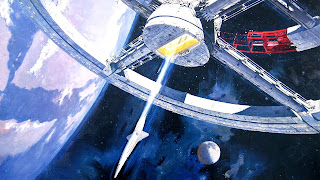 The film’s director, Stanley Kubrick, used the Cinerama technology to give us a glimpse of the universe as surely only God could see it. The opening scene was essentially a visualisation of “Sunrise", the first minute-and-a-half of Also Sprach Zarathustra, an orchestral tone poem composed in 1896 by Richard Strauss. Strauss was in turn inspired by the philosophical writings of Friedrich Nietzsche.

Kubrick matched music and film perfectly, depicting the Sun rising over the Moon, with the Earth in the foreground. It was a stunning introduction to a movie that I suspect would have left even Strauss and Nietzsche spellbound.

Whatever about those two luminaries, a seasoned journalist like the Evening Herald’s film critic felt the force of Kubrick’s vision. He described 2001 as:

A deeply penetrative spiritual exercise that spans all human history, and then transcends the limits of man’s discoveries in a riveting exploration of the concept of “extra-terrestrial intelligence”.[1]

As I was only 15 when I first saw the movie, you could attribute the intensity of my own response to a mixture of puberty and the effects of the still-exciting Cinerama technology. But I suspect there was more to it than that.

Looking back I believe that what really got under my skin was the film’s underlying message. This was the proposition that, far from being a natural process, Homo sapiens arose in the remote past as a result of an external intervention. What’s more, the film suggested that another intervention would be necessary at a future date, 2001, to propel mankind into the next stage of its evolutionary journey.

In short, 2001: A Space Odyssey was a cinematically-rendered hypothesis of how our species came to dominate the Earth, not as the result of either divine creation or organic evolution, but through the calculated plan of a superior alien race. One might call it “intelligent design”, albeit not the type popular in some evangelical Christian circles.

Since 1968, several other gifted movie-makers have revisited the themes explored by Kubrick. In Close Encounters of the Third Kind and E.T. the Extra-Terrestrial, Steven Spielberg delved deeper into the notion that well-disposed aliens are keen to help mankind. Other films like The Truman Show and The Matrix played around with the idea of humans as the apparently helpless playthings of a less benign intelligence.

But none came near the breath-taking genius displayed by Stanley Kubrick in 2001: A Space Odyssey. For me it opened a window into possibilities I had never before imagined.