It’s a long while since I found it funny, but there was a time when I would not have missed an episode of the TV panel show, Have I Got News for You. One of its stalwarts was comedian Paul Merton. His deadpan, surreal interventions were often the highlight of the popular news quiz. A recurring theme of his weekly flights of fancy was the absence of the jet pack from the modern world.

Being of the same generation as Merton, I suspect his inspiration came from the 1965 James Bond film, Thunderball. The opening scene shows Bond escaping from several armed villains by donning a jet pack and flying to safety. As he takes off the jet pack after landing, Bond remarks to his glamorous companion that “No well-dressed man should be without one”. Both get into Bond’s Aston Martin sports car, which is equipped with an array of hidden weapons, including a water cannon that Bond uses to knock his pursuers to the ground.

One of the great Bond pre-credit sequences, but is there another movie scene that better encapsulates the 1960s fantasy of the red-blooded, gadget-loving male?

Like other youngsters at the time, I was hooked on the suave superspy played by Sean Connery. I wanted to be like him. It wasn’t just his ease with the latest technology. Women were so mesmerised by his animal magnetism that they fell into his arms (and into his bed) without hesitation. As the lyrics of Thunderball’s theme song explained, Bond did not feel bound by the rules and customs of normal society.

He knows the meaning of success,

His needs are more so he gives less

Any woman he wants he'll get

He will break any heart without regret.

It is easy to see now that James Bond was a self-centred prick, a caricature of a man. But, as I have outlined in a previous post, 1960s popular culture practically deified men as the justifiably entitled superior sex. A woman’s place in that topsy-turvy world was to reflect male glory to an adoring audience. Just like Bond’s “glamorous companion” in that scene from Thunderball.

As far as I can judge her sole function in the film was to allow us, the audience, to hear Bond’s witticisms - like the jet pack quip. Mitsouko, the actress who played the part, had appeared in several Eurospy films in the early-60s. These were low-budget rip-offs of the blockbuster espionage movies then emanating from Hollywood - of which the James Bond series was the most successful. 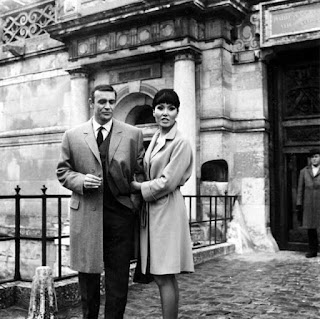 Mitsouko’s role in Thunderball was so small that she does not appear in the credits. Her character is an anonymous agent from MI6’s “French station” who accompanies Bond on his latest mission. We do not know what she sounded like because, for whatever reason, her few lines were dubbed by someone else.

Thunderball, while easily the most successful film Mitsouko appeared in, did not give her the breakthrough she might have wished for. She returned to the trashy sub-Bond films where she had begun her screen career and her last movie was released in 1966.

So far in these posts I have tried to avoid falling into the nostalgia trap, of lamenting the loss of the “good old days” of my youth when everything was much better than today.  On the contrary, I have argued that the 1960s was a period of unfulfilled promise and disappointment. The hope that was engendered at the beginning of the decade by John F. Kennedy, “Good” Pope John, and the Beatles was short-lived. Technological advances like Cinerama, Concorde, and the jet pack did not last.

Unlike these, Mitsouko is barely a footnote in the history of the 1960s. The only reason we know she existed at all is because of those few moments of celluloid when she appeared in the same scenes as Sean Connery. However fame and fortune as a global celebrity eluded her. But perhaps she found personal satisfaction in a life conducted away from the spotlight?

Whatever path Mitsouko took after leaving the movie world did not end happily. In March 1995 she killed herself at the age of 52.