I don’t have any specific memories of Easter during the 1960s. Christmas was far more important in my schedule, if only for the food and the toys. Of course Easter was also a holiday from school (and we had chocolate eggs!), but it was really a poor relation to the Big Day several months earlier.

Because it commemorates the Resurrection of Jesus from the dead, Easter is actually the more significant feast in the Christian calendar. The old Catholic Encyclopaedia calls it “the corner-stone upon which faith is built”.[1] 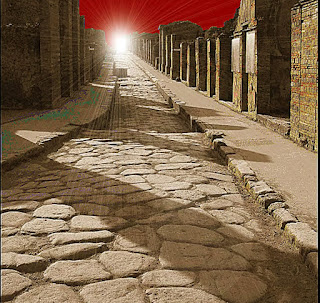 To honour this special day in this year of years, here is a unique description of the Resurrection itself. It is taken from Brian Cleeve’s The Fourth Mary, written in 1977 long after Jesus walked the earth.
The book purports to be “the story of the Crucifixion, told from the unfamiliar viewpoint of the enemies of Jesus, of those who planned it and regarded it as their triumph”.[2] Although Brian was a successful author with long experience in developing and crafting a story, this one was different.

I was well aware at all times of exactly what I was doing. I chose the words. The style is mine, with all its faults or personal characteristics. What is not mine is the story. I was told the story, or rather, made aware of it, and wrote it down in my own words.[3]

If you believe that this is true then what follows is an eye-witness account of what many regard as the greatest event in human history. If not, I hope you will read it as a sincere attempt to describe an otherwise ineffable moment.

And then, as if the stars had grown nearer, there was a light in the sky, a soft haze of light like the stars falling, growing, growing, until the hillside was as bright as dawn, and I felt the light taking hold of me, and not my body but my soul shivering, in terror. The light was gathering round the tomb. I saw my mistress flung to one side as if she was rags, filth swept away by the wind. The stone moved, it rolled to one side, and there was such light behind it, such light inside the tomb, that I covered my eyes and I still saw it, as one sees the lightning. A white blaze of fire, and he was there, walking. Only he had grown tall, and beautiful.[4]