When German-born philosopher Herbert Marcuse spoke to students at Antioch College in Ohio, one member of his audience was not impressed with what he heard.

It was the winter of 1971 and David Ghitelman was filled with the revolutionary fervour then sweeping through college campuses across the western world. He was a rebel looking for a cause, and he must have thought this ageing idol of the New Left would supply it. But instead of urging his eager young listeners to rush to the barricades, Marcuse counselled patience. Intellectuals were needed to guide society in the future, he told his audience. The students listening to him should stay the course and pursue the “long march through the institutions”.

If was as if he had told us there would be no dessert until we had eaten our spinach. We had come to believe in the politics of instant gratification: If it feels good, do it, do it now. A long march through the institutions, a protracted struggle demanding drudgery and patience, was the last thing we wanted.[1]

Ghitelman’s eagerness for radical action is understandable. Many young idealists feel a restless desire for immediate action. But a successful revolution requires thought and planning. Is that why it is often those long past the first flush of youth, like Vladimir Lenin or Ayatollah Khomeini, who lead revolutions that actually work? They have the patience and forbearance to wait until the time is right before acting.

In my last post I wrote that “the concept [of the ‘long march’] predated the Sixties”. In fact it may even predate recorded history. In the 17th century a French poet named Jean de La Fontaine published a collection of fables which he adapted from older sources. One of these was the famous Aesop who lived six centuries before Christ. If that’s not far enough in the past, it is thought that Aesop derived some of his fables from an oral tradition that was already ancient in his day. 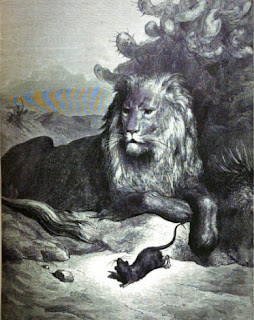 Many of these fables were used to convey a moral or ethical message to the reader or listener. One called “The Lion and the Rat” illustrates how a humble rodent could help the mighty King of the Jungle by gnawing through the ropes that bound him. The lesson is encapsulated in the last two lines of Fontaine’s version:

Patience and length of time may sever,

What strength and empty wrath could never.[2]

In my musings on the 1960s I have explored both the origins and the impact of the Cultural Revolution I lived through. But it is clear now that, pivotal as the decade was, it did not mark the beginning of something - or indeed the end. To use a sporting analogy, the “sound of the Sixties” was like the bell that rings out as runners enter the final lap of a long-distance race.

So, if the finishing line is now in sight, it is important to understand how we got here. And that story does not begin in the 1960s or even in the 20th century. Like Fontaine’s or Aesop’s fables, the genesis of our present global crisis lies much, much further back in human history.

It is a tale more fascinating and more terrible than anything Aesop or his successors would have dreamt of. It cuts to the heart of human existence over the aeons we have lived on this planet. Above all it is a tale of the war that has been waged by evil against God, a war that has intensified over the last 2,000 years.

During that time those waging the war have pursued a long-cherished goal. A goal so important that, for century after century, its adherents were willing to devote their lives to fulfilling it – even though they themselves would not be around to see the fruits of their labours.

But what is the goal? Who conceived it? And why?

These questions, and others that naturally follow, can be answered only by widening our perspective. That means exchanging the 1960s for less well-trodden pathways of historical enquiry.

In a new blog entitled History In The Making I will take on that task.

Meanwhile Na Seascaidí will continue to reflect my abiding interest in the 1960s.