Once a year the Christian Brothers would drag us onto a cold and windy field to play a bit of hurling. I was not sure why we had to endure this ordeal, and I did not really care. Now I suspect the Brothers were trying to counteract the prevailing devotion to English football shared by my classmates, and maybe also they hoped that one or two of us would display some ability in the national game.

I could put up with this for a couple of hours safe in the knowledge that I would not be picked for any further torment on the playing pitch. I was not a sporty kid, by either inclination or aptitude. So, although I was not remotely attracted to the native sports which were the preoccupation of my school teachers, I paid little attention either to the so-called “foreign” games like soccer or rugby.

I do recall one exception to my indifference to football though. During the long summer break of 1966 I diligently recorded the results of all 32 matches played in the qualifying rounds of the World Cup. Somehow I had acquired a booklet specially designed for fans of the tournament, with lots of blank spaces to write in the details. I watched all the games, including the final between England and West Germany. But I lost interest after that and the booklet has long since disappeared.

If I could not work up much enthusiasm for team sports, I was more ambivalent when it came to individual competition - boxing for instance. Not that I wanted to see two men trying to batter each other into submission, even under Marquess of Queensberry Rules. But during the 1960s one man singlehandedly elevated boxing above its primitive roots into something almost noble. This was Muhammad Ali, or Cassius Clay as he was known before changing his name in 1964. 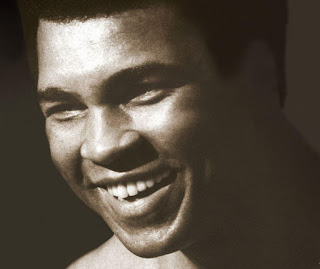 Ali’s clever quips and nimbleness in the ring made his opponents look dull. Through a combination of innate charm, self-confidence, and high intelligence, he transcended the boundaries of his chosen sport to become a global celebrity. Like the Beatles, Ali brought fun and colour into an otherwise drab world.

Almost a year after the World Cup ended, Muhammad Ali was stripped of his Heavyweight Champion title and prevented from boxing professionally for more than three years. The fact that Ali was ousted because of his principled refusal to fight in Vietnam went right over my head at the time.[1]  But his departure from the ring ended any attachment I felt towards boxing.

During the World Cup it was the creation of lists or datasets that engaged my attention. The names and numbers I so painstakingly wrote down could have come from the pop charts or the railway timetable. The fact that they were based on an international football competition was incidental. If I were a youngster nowadays I might spend my time on something equally pointless, such as logging details of the government’s daily pandemic bulletins for example.

However, my interest in boxing ran a bit deeper. I would prefer if Muhammad Ali had achieved his success in a less brutal endeavour. His skill and grace would have brought honour to whatever branch of athletics he chose to pursue. But if he had been a champion sprinter, for instance, I doubt if even Muhammad Ali could have overcome my indifference to sport in general.

No, Ali’s appeal for me rested on his artless way of suggesting that no one need be bound by the limits of society in pursuing their true potential, on or off the sporting field.