Showing posts from December, 2020
Show All

I must have been quite small when I was brought to Pim’s department store in South Great George’s Street. It was coming up to Christmas and Santa Claus was due to arrive for his month-long stint at the grotto.  There were other big stores in town, like Clery’s and Brown Thomas, but I was taken to Pim’s on the promise that something special would happen. And so it turned out. As we waited with the crowd on the pavement outside, a helicopter landed on the flat roof and Santa emerged, waving down at us five storeys below. Pretty spectacular alright, but not quite the show I was hoping for. For some reason I imagined that when Santa disembarked from the chopper, he would parachute off the rooftop, floating gracefully to the ground below. Now that would have been a sight! Another highlight of Christmas was our visit to the Moving Crib in Parnell Square. Every Catholic church in Ireland had its own crib featuring the traditional nativity scene of Joseph, Mary, and the baby Jesus surrounded b
Post a Comment
Read more 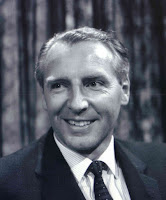 Following the news of Robert Kennedy’s assassination, I was keen to learn more about what was going on in the world. In Ireland in the late-1960s, this meant tuning in to Raidió Teilifís Éireann’s (RTE) current affairs programme, 7 Days .  The programme’s main presenters were Brian Farrell, John O’Donoghue, and Brian Cleeve. Farrell was a noted academic and political scientist, O’Donoghue already an experienced current affairs anchor, and Cleeve had distinguished himself as a commentator on Irish life in his Discovery series.   Brian Cleeve stood out for his English accent and somewhat aristocratic appearance. In 1966 his accent got him into trouble with RTE. Someone there did not think it appropriate for him to be so prominent on national television just as the country was about to mark the jubilee of the 1916 Rising. Brian was briefly suspended but public opinion caused the station to reinstate him. Now he was back in a top slot investigating the big news stories of the day. His fir
Post a Comment
Read more

In an earlier post I described how Ireland responded to the pop revolution of the 1960s. Firstly there were the showbands who pumped out the big hits in packed dancehalls around the country. The Clancy Brothers, Johnny McEvoy, and others tapped into traditional music to produce something a bit more home-grown for the Irish fans.  A third manifestation of local pop culture were the beat groups such as the Creatures and Orange Machine. In terms of style and sound, these were the closest thing we had to the international acts then changing the face of popular music. But the beat groups were the Cinderella of the Irish pop scene. Few managed to dent the national charts, and none emulated the global success of their American or British counterparts. One of those who nearly made it was the Granny’s Intentions group from Limerick. Sometime in the late-60s I watched them perform on Irish television. Lead singer, Johnny Duhan, adopted the cocky demeanour of Mick Jagger. But he had a stronger a
1 comment
Read more 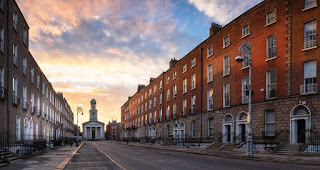 As regular readers will know, for much of the 1960s I was fascinated by pop music and religion. The fact that I was largely oblivious to other aspects of Irish society and culture simply reflects my immaturity at the time. But, as I now realise, it was not just my twin preoccupations that were being transformed or even destroyed. I was living through a revolution that threatened to alter everything, including Dublin’s architectural landscape.  When I was growing up the look of Dublin reflected the city’s history, which dated back to the Middle Ages. There were medieval buildings like St. Audoen’s Protestant church and Dublin Castle, both located only a mile from where we lived. Just across the Liffey was the Royal Hospital, Kilmainham, built in the 17th-century but largely gone to seed - so off-limits to me.  Of course there were also new glass and steel structures rising up in the city centre, such as the horrible Hawkins House near College Green. This replaced the Regal Cinema where
2 comments
Read more
More posts