By J.P. Bruce November 14, 2020
I grew up during the 1950s and 1960s in Ireland - an almost totally Catholic country. Like everything else we learnt in those days, from multiplication tables to poetry, we imbibed the fundamentals of religion through rote-learning. Every schoolboy had a Green Catechism containing the basics of Catholic dogma. No one expected us to understand the complex theological doctrines (like the Trinity) presented in its pages. We just had to memorise it all.
The Catechism contained 443 questions and answers divided into three sections: 1) The Apostles’ Creed, 2) The Commandments of God and of the Church, and 3) Prayer and the Sacraments. The book’s genius lay in its distillation of often arcane concepts into a few lines that, if repeated often enough, could be committed to a child’s long term memory.
If the idea of rote-learning turns many people off today, so too does a lot of what the Catechism contained - especially the idea of Original Sin. The term was introduced in question 57, one of a series dealing with “Our First Parents” - Adam and Eve. According to the Catechism, Original Sin was a state of imperfection passed on to every generation of humans since Adam and Eve. This state of imperfection was a legacy of their decision to yield to devilish temptation, rather than obey God.
It’s easy to dismiss the Adam and Eve story as childish fantasy. But not so easy to reject the principle embedded in the story - that human beings are inherently imperfect. Here is what my Catechism had to say about that:

Because of Adam’s sin, we are born without sanctifying grace, our intellect is darkened, our will is weakened, our passions incline us to evil, and we are subject to suffering and death.[1]

Sanctifying grace is a matter of faith. But the other consequences: darkened intellect, weak will, evil passions, and suffering and death? Surely even an atheist would agree that these are part and parcel of the human condition. Look at Germany in the 1930s and 1940s. There are numerous other examples. For instance, what about the witch-hunts of the 16th and 17th centuries, surely one of the blackest periods in human history? 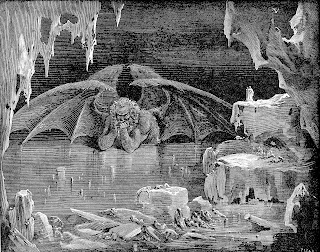 Religious authorities at the time decreed that witchcraft posed a fundamental threat to Christianity. Those authorities could be Roman Catholic or Protestant. John Calvin was just as vehement in his denunciation of witches as the pope in Rome.[2]  But church leaders needed the secular powers to root out the evil they saw all around them. And there were lots of kings and princes only too willing to follow direction from learned clerics.
Across Europe and the Americas, laws were enacted and courts empowered to find, prosecute, and punish anyone who endangered public safety through the practice of witchcraft. The result was that up to 60,000 convicted witches, mainly women, were executed in Europe.[3]
None of this could have happened without the support of ordinary people. Some were reduced to a state of terror by the pronouncements of experts like Heinrich Krämer and Jacob Sprenger, two Dominican inquisitors, whose book, Malleus Maleficarum, (“The Hammer of the Witches”), was a best-seller.[4]  Fear was instilled in the illiterate by graphic images of witches astride their broomsticks or being burnt at the stake. Thanks to the proliferation of printing presses, these were easily copied and circulated.[5]
The result was that neighbour denounced neighbour - quite often before the accuser could be fingered as a witch, him or herself.
Eventually public hysteria faded away as religious and legal authorities began to question older beliefs about witches. Nowadays we wonder how any civilised people could inflict such misery and damage on themselves because of unfounded superstition. We draw comfort from the conviction that science and reason now form the bedrock of modern society.
During the 1960s, I imagined that the world was getting better – an illusion I have discussed previously. Perhaps if that sense of progress had continued indefinitely, I might have been persuaded that human perfectibility was possible. But in so many ways - cultural, religious, economic, etc., etc. - the Sixties dream turned out to be nothing more than a chimera. But it's not just the Sixties. Examples from earlier times demonstrate humankind’s repeated propensity for short-sightedness and stupidity.
As hysteria engulfs the world in 2020, the teachings drummed into me more than half-a-century ago take on a new relevance. Is the extraordinarily harsh and disproportionate global response to Covid-19 the latest manifestation of our imperfection?
And if that imperfection is not amenable to any human cure, shouldn’t we take a fresh look at Original Sin?
[1] A Catechism of Catholic doctrine (Dublin, 1951), p. 21.
[2] Stuart Clark, Thinking with demons: the idea of witchcraft in early modern Europe (Oxford, 1997), p. 461.
[3] Merry E. Wiesner-Hanks, Early Modern Europe, 1450-1789 (Cambridge, 2006), p. 386.
[4] Leo Ruickbie, Witchcraft out of the shadows: a complete history (London, 2004), pp. 71-2
[5] Charles Zika, The Appearance of Witchcraft (Oxford, 2007), p. 179.
Calvin John Krämer Heinrich Sprenger Jacob