Donal Harris lived a few minutes’ walk from our estate and was in my class at the local Christian Brothers school. He was a soft-spoken boy, intelligent and shy, and we got on well.

In 1964 we joined the altar boys together. Once we had been trained in the liturgical rubrics and the Latin responses, we were chosen to serve our first Mass. Between bell-ringing and looking after the cruets, there was enough to keep two servers busy, even on a weekday. I remember little of it, but our parents were in the congregation and I’m sure they were proud of the pair of us.

A year or two later things changed. We both liked pop music but Donal’s interest became more focused and more intense than mine. He took up the drums, grew his hair, and started wearing low-cut trousers called hipsters. One day in class I asked him who had written “Those Were The Days”. His answer, Ginger Baker, puzzled me. Shortly afterwards I learnt that Mary Hopkin was not the only pop star to have released a song of that name. A British rock group named Cream, whose drummer was Ginger Baker, had recorded an identically-titled track on their LP, Wheels of Fire.

I did not know it at the time but, from the age of 14, Donal was already performing as Don Harris in various clubs around Dublin. Eventually he was expelled from school - or he left, I don’t know which - before our final examination, the Leaving Certificate. By then we had grown apart and I lost touch with him after that. Through the music press I learnt of his progress through Dublin’s rock scene. None of the groups he joined, like The Urge or Peggy’s Leg, stayed together very long, and none achieved much fame outside the local scene. But maybe it wasn’t the lure of fame or fortune that drew Donal into that world. 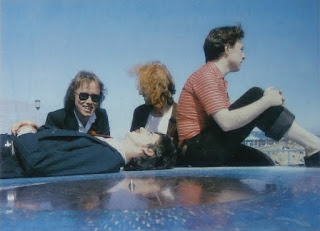 The south inner city area where Donal and I grew up was a colourless and boring place. But it was paradise compared with our school. I remember it as a brutal institution where corporal punishment was meted out daily, rarely reluctantly and often with gusto. I coped by being as inconspicuous as possible, sitting at the back of the classroom and counting the minutes until the sound of the bell heralded freedom for another day.

Donal probably felt the same as I did, although I don’t recall him ever talking about it. I wonder now if his decision to change tack at the age of 13 or 14 was born out of a desire to escape from our hideous environment. Or was it something deeper? Donal’s transformation was so comprehensive and so final that I suspect it would have happened anyway. It was as if he was so dissatisfied with himself that he decided to become a different person entirely.

I think many people feel that impulse to change, to become somebody else. But few follow through. Donal was a rare exception. He made the transition to his new life with a degree of dedication that is impossible not to admire. He demonstrated by his demeanour and appearance that he was rebelling against the role that had been allotted to him. He managed not only to go against the grain, but to persist long enough to emerge into a totally new life as a rock drummer. According to one source, Donal became a respected session musician, performing with David Bowie in the 1980s.

Historian Arthur Marwick summed up the sixties cultural revolution as having “established the enduring cultural values and social behaviour for the rest of the [20th] century”. He went on, “there has been nothing quite like it; nothing would ever be the same again”.[1]  It doesn’t matter whether you believe that revolution to have been a spontaneous outburst of youthful creativity, or a contrived overturning of the old order. The continuing truth of Marwick’s conclusion is plain to see by anyone who lived through that decade.

Donal died in Switzerland in the early 1990s. So we cannot know what his perspective would be now on that time. However it is safe to say that Marwick’s judgement on the sixties revolution could be applied to Donal himself - nothing was ever the same again for him as a result of his life-changing decision. For better or worse he took control of his life and, as far as I know, kept to the new course he set for himself.