One of the biggest events of my young life, but I can recall hardly any of it. It must have been the late spring of 1960. I had just turned seven, an important milestone in the eyes of the Catholic Church. That august institution calculated that I could now distinguish between right and wrong, that I had in fact arrived at the age of reason or understanding. It was time for me to confess my sins and take the Blessed Eucharist for the first time.

I had already received the first of the seven sacraments when, as a week-old baby, I was baptised in our local church. Sacraments two and three, Penance and Holy Communion, would now follow in rapid succession. I was only seven, so I had no idea what these rituals signified. I just did what I was told and learnt what I had to.

As I said at the top, my mind is largely a blank about this period. I have no memory of those few minutes in a dark confession box as I tried to remember my rehearsed list of sins. Or of dressing up in my first suit and having a white rosette pinned to my lapel for the Holy Communion ceremony. Nothing comes to mind of the inevitable visits to neighbours and relatives afterwards, and being told how grown-up I looked. I must have collected a lot of cash during said visits, but how much and where it went I have no idea. 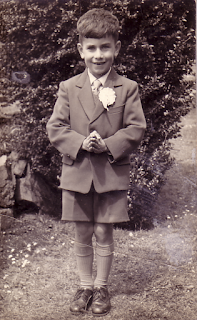 Only one thing stands out in my memory more than six decades later, and it’s something I am not proud of.

My first school was at a nearby convent run by the Sisters of Charity. One of the nuns, a nice lady as I recall, prepared our class for Holy Communion. I have forgotten the detail of her instruction, but one stipulation she made is etched in my mind. She made it plain that, when we received the sacred host on our tongues, it should not touch our teeth. Instead we were to allow the wafer to dissolve slowly in our mouths. This after all was the body of Christ and must not be defiled.

I took this warning very seriously, but not everyone did - not Francis, one of my classmates. Francis was a bit “slow”, a boy of low intelligence. He smiled a lot and generally kept to himself. He was pretty harmless really. As we returned from the altar to our pews I noticed that Francis was chewing something. Clearly he was masticating the blessed bread! Outside the church I found the nun and told her what I had seen. What she did next I can only guess.

A few days later I accompanied my father on his rounds. Each week we walked around our locality to collect the parish dues on behalf of the clergy. One stop along the way was at the home of my fellow communicant. His mother answered the door. I have no memory of what she said or her demeanour as she said it. I do know she was angry at me for telling on Francis. I burned with shame as she delivered her rebuke.

If I had any subsequent conversations about the episode with the nun, Francis’ mother, or Francis himself, they left no impression on me. All I was left with was a nagging doubt. I had obeyed authority by informing the nun about what I had seen. But why did I feel it was wrong to have done so?

Maybe at this time, or a little later, I learnt the Ten Commandments. According to my green Catechism, the eighth read as follows:

Thou shalt not bear false witness against thy neighbour.[1]

This was a wise and sensible injunction against undermining someone’s reputation by spreading falsehoods about him/her. Of course such a thing is wrong, and not just for Christians. But the eighth commandment wasn’t simply a prohibition against lying. It also covered something called “detraction”, which the Catechism defined as “the sin committed by those who, without sufficient reason, make known the hidden faults of others”.[2]  Even telling the truth about someone could be wrong - if it damaged their character.

This line of reasoning is far too complex for any seven-year-old to absorb. But at the time I did not need to understand it as I do now. That painful intervention by Francis’ mother was enough to set me straight until I could figure it out for myself.

It took time, but as I grew older I lost my eagerness to please worldly authority. Manmade rules and regulations are necessary to maintain a safe social order. Now I am convinced that, if they infringe on our basic humanity, I should not comply.

Perhaps at last I have reached the age of reason.