During the last few months I have been asking myself a fundamental question. What do I mean by the "1960s"?

But do major happenings, like those that make up a far-reaching cultural revolution, fall neatly into a ten-year period with an arbitrary starting point?

Watershed moments such as the assassination of Archduke Ferdinand or the fall of the Berlin Wall did not occur precisely at the turn of a new century or decade. These and other pivotal events - rather than dates in a calendar - are often used to frame historical epochs. For instance, some academic studies of British history consider the "long eighteenth century" as having begun with the "Glorious Revolution" of 1688, with the end point set at the Battle of Waterloo in 1815. Although it redefines the 18th century as a period of 127 years rather than one hundred, this approach arguably makes for a more coherent way of exploring the past.

I believe now that we need to apply a similar, looser definition to the 1960s if we are to understand the cultural earthquake that continues to shape the world we live in today. It’s not as if some demented genie emerged from a bottle at the stroke of midnight on December 31st 1959 and disappeared again exactly a decade later. The things I have written about here may have occurred during the 1960s, but many either originated or were planned in previous times. Other connected events may even have occurred later. So, in their impact on Ireland, at least, I believe there is a case to be made for a "long 1960s", covering maybe 15 years.

I would set the starting point precisely as 28th October 1958. This was the date of John XXIII's election as pope. As I have argued in a previous post, the new pope's policy of Aggiornamento ("Modernisation") was a critical factor in the cultural upheaval I have written about.

As for an end date, there are several candidates. One is the retirement as president in June 1973 of Éamon de Valera. For many years, de Valera represented the traditional values threatened during the 1960s. So with his departure from public office, the long shadow he cast over Irish society was finally removed. One of the few other public figures to match de Valera’s influence was Archbishop John Charles McQuaid. His death in April 1973 also seemed to signal the official passing of a bygone era.

But there is a third development to consider. 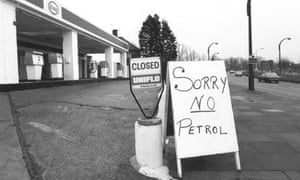 I remember the 1960s as a time of uninterrupted progress and improvement. With the dawn of the 1970s, that promise looked set to continue. However reality set in when the oil crisis struck in the autumn of 1973. By the end of that year, higher prices and rising inflation led to a severe reduction in living standards. More importantly from a psychological point of view, my confidence that life would continue to get better was badly shaken. As an academic economist has reflected:

The mood of despair in Ireland and the western world was palpable, with few expecting recovery any time soon.[1]

These two events: the papal election and the oil crisis, were international in origin. They could be said to symbolise Ireland’s status, then and now, as a small state vulnerable to the sweep of global events. But any suggestion that this country must inevitably give way to international trends would be wrong. In previous posts I have described how two very different individuals, Seán Ó Riada and Archbishop John Charles McQuaid, tried to thwart key elements of the cultural revolution: religion and music. They may not have succeeded, but they did try.

Another of these "awkward types" will be the subject of my next post.