By J.P. Bruce May 05, 2020
John Charles McQuaid is not an ideal candidate for the underdog in this story; far from it. But that is what he turned out to be.

As archbishop of Dublin from 1940 to 1972, McQuaid presided over the largest Roman Catholic diocese in Ireland. According to the 1961 census, the total population of the greater Dublin area was just over 718,000. Of those, more than ninety-two per cent were members of his flock.  But the archbishop’s power and influence were not based simply on the size of his patch. 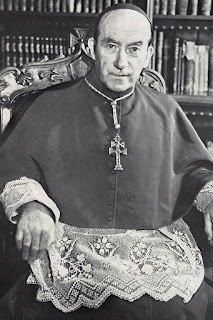 As the nation's capital city, Dublin was home to the main public and private organs of the state. These included the national print and broadcast media, centres of education such as Trinity College, and of course the major government departments. McQuaid believed that his ecclesiastical authority extended over all of these bodies, and few demurred. In March 1965, the Minister for External Affairs, Frank Aiken, sought the archbishop’s permission to attend a Lutheran service in Dublin. McQuaid acceded only on condition that the minister took no active part in the service. That was the way things were done in Ireland just a few decades ago.

Yet, despite his power and prestige, archbishop McQuaid found himself fighting a rearguard action in his attempts to save the traditional Mass. At first he must have been confident that he could follow the Church’s new policy, while simultaneously preserving his favoured Latin rite. But as the years went by he became more and more isolated in his devotion to the old ways.

The Second Vatican Council voted overwhelmingly to permit the vernacular to be used in the Mass, but it was never made compulsory. Theoretically, therefore, McQuaid could have kept Latin in the liturgy. On the other hand, the pope made it clear that he wanted the new Mass to be said in the languages of the people. So the archbishop was never going to defy papal authority. But he saw a loophole. Although English was the spoken language of most Irish people, the first “official” language was Gaelic. And there was a tiny, but loud, Gaelic-speaking minority among the capital’s Catholics. These Gaeilgeoirí, as they were known, would have to be catered for.

So McQuaid instituted an Irish-language Mass in each parish every Sunday. It annoyed a lot of priests and laypeople who could hardly speak the language. But it gave the archbishop a pretext to make the same concession to traditionalists. McQuaid had put one of his senior lieutenants, Monsignor Patrick Boylan, in charge of implementing the liturgical reforms. Because Boylan and his team approved the Gaelic Mass, the archbishop expected the same result when he proposed one Latin Mass each Sunday across the diocese. But Boylan objected because he saw no public demand for it. The problem was that, even though they far outnumbered Dublin’s Gaeilgeoirí, those who wanted to keep the Latin Mass were nothing like as vocal in their demands.

Maybe McQuaid foresaw this because, in 1962, just before the Vatican Council opened proceedings, he commissioned a survey of Catholic opinion in his diocese. Among its findings was a huge level of support for the status quo, including the use of Latin in the Mass.[1]  But five years later the archbishop’s survey carried little weight. Besides, the survey also found that most Catholics did what the Church told them to.[2]  And whatever about their archbishop’s views, Dubliners could see that the Church wanted the Mass changed. So Boylan prevailed and McQuaid withdrew his proposal.

In Dublin, as in almost every diocese around the world, the Tridentine Mass was extinguished and replaced by the Novus Ordo Missae, Pope Paul VI’s New Mass. McQuaid was made to retire when he reached seventy-five. During his last years he was allowed to celebrate his preferred Latin Mass, but only when he was alone and never with a congregation present.

Apart from a young, naïve altar boy and an elderly cleric, did anyone really care about the passing of the ancient form of Catholic worship more than fifty years ago?

Maybe not, but perhaps a better question is: did it matter?