By J.P. Bruce April 21, 2020
Novelist Evelyn Waugh, author of Brideshead Revisited, was a Roman Catholic convert who spent his last years trying to save the Latin Mass from oblivion. Not long before he died in 1966, he became despondent at the prospect of the authorised changes in liturgical practice, which he referred to as “the novelties about to be introduced”. In a letter to John Carmel Heenan, archbishop of Westminster, Waugh declared that “church-going is now a bitter trial”.[1]

By 1980, the full extent of the loss was clear to another English writer, Michael Davies. “Pope Paul VI”, he wrote, “presided over and authorised a liturgical revolution which has destroyed the Roman Mass – the greatest treasure of the Latin Church and possibly the greatest achievement of Western civilisation.” [2] 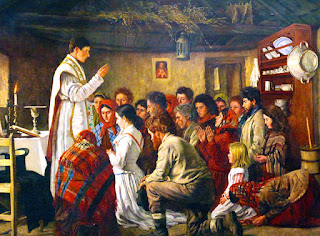 As a young boy back in the 1960s I accepted life as it happened. It was many years before I realised that I wasn’t the only Irish Roman Catholic to feel bereft at the extinction of the Tridentine rite. I found out that the most senior churchman in Dublin had tried to stall the advent of the New Mass. At that time I was only dimly aware of the fearsome archbishop McQuaid, and I doubt that I ever met the man. The only opportunity for a personal encounter would have been my Confirmation ceremony in 1964. But the archbishop was probably away in Rome at the Second Vatican Council because, if he had administered the sacrament that day, I think I would remember him!

John Charles McQuaid was a brilliant student and he particularly loved Latin. As a schoolboy at Blackrock College, he achieved first place in Ireland, with a mark of 98%, in the Latin paper of the Junior Grade examination. He continued to excel as a third-level student at UCD, gaining a first-class honours degree in Classics, Latin being one of his top subjects. So when he stood up at the Second Vatican Council to deliver his maiden address, it is hardly surprising that he defended the continued use of Latin in the Mass. But McQuaid’s stance was not based simply on linguistic preference.

When the Council got underway the archbishop was dismayed at the direction some of the other bishops wished to take the Catholic Church. They were trying to alter or even ditch the Tridentine Mass. They saw it as a barrier to reuniting Roman Catholicism with the other Christian denominations. Therefore it had to be removed. This policy, known as Ecumenism, was the stated goal of senior Vatican figures, including the man who launched the Vatican Council, Pope John XXIII. When McQuaid realised that the Council was considering some kind of “joint worship” between Catholics and Protestants, he told a fellow bishop that the proposal was “altogether repugnant to me”.[3]

To say that McQuaid found the very idea of a rapprochement between his Church and the other Christian faiths to be distasteful is an understatement. Notwithstanding the ecumenical direction of the Church, he continued to reiterate traditional, pre-conciliar teaching on the status of non-Catholics. A typical example can be found in his Lenten Pastoral of 1968. In it, he referred to “the tragic revolt (which is incorrectly called the Reformation), [and which] succeeded in breaking the unity of the Church”.[4]

For McQuaid, Luther’s Reformation was not an historic event - it was a current threat. If Ecumenism was the goal of the Council, he realised that allowing the Latin Mass to perish would hasten its arrival. How could he prevent this, and at the same time remain obedient to the magisterium of the Roman Catholic Church? That was the challenge he set for himself: to outfox his opponents without becoming a rebel himself.