By J.P. Bruce April 14, 2020
Part of taking for granted the pop music of the 1960s was that I did not think too much about how records actually came into being. I don’t mean the physical discs themselves, whether 45 or 33⅓ rpm, but the music that emerged from my record player or the radio. It was not until later that I began to appreciate that there were two separate processes involved.

First, someone had to compose the tune and words of a song. That might be a single person, like Paul Simon, or a duo such as John Lennon and Paul McCartney. If these musicians had lived before the recording age, their songs would have reached the mass market in the form of sheet music. A talented person who could read music might then perform the songs at the piano. So composition and performance were two distinct processes.

However, long before the 1960s that had all changed. By then the public didn’t have to learn how to translate musical notation into sound. They could listen to a recording of the song instead. Of course that usually meant a pop star not only having to create a new song, he also had to rehearse and record it in a studio, with a sound engineer and a producer there to oversee the process. From start to finish, making an album could take many weeks or even months of work.

By the 1960s, the record industry had become a highly profitable business and a top selling LP could make a lot of money for those involved in its creation, whether producers, executives, or the musicians themselves. Given the high stakes, it would be surprising if much was left to chance when a new record was being made.

One problem faced by record companies was that by and large the young pop stars they signed up could not play their instruments very well. So professional, musically-literate musicians were hired to play on the recordings instead. In the USA, the same small band of musical pros played on many of the hits of the day, including The Byrds’ “Mr. Tambourine Man” and Sonny & Cher’s “The Beat Goes On”. And they did not simply follow the notes on the page, they also contributed to the arrangements. For instance, bassist Carole Kaye came up with the introductory guitar notes she played on Glen Campbell’s recording of “Wichita Lineman”.

But it was not just the pop stars’ poor musical skills that had to be masked. Their ability to write high quality original material was not helped by the other demands they faced. For the first few years of their fame, the Beatles were obliged to follow a hectic schedule of recording, touring, and public relations work that could not have left much time for writing new songs. On their early albums, they got round this by mixing cover versions with original compositions. But how did they manage to release so many recordings featuring only their own music?

Although the Beatles borrowed ideas from their contemporaries, they usually stopped short of outright plagiarism. At a 1966 press conference in Los Angeles, Paul McCartney was pretty forthright: “We pinch as much from other people as they pinch from us”. Some examples from the Beatles’ canon can be found here. While this was all pretty harmless, some sceptics go further and question the authorship of the Beatles’ original compositions. 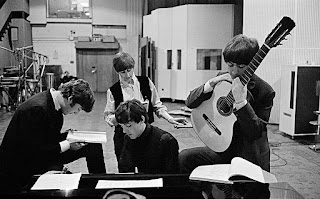 In his video, Did The Beatles Write All Their Own Music? Mike Williams examines the making of Rubber Soul. He argues that the supposed schedule left insufficient time for the fourteen original songs on the album, plus a double A-sided single, to be written, rehearsed, recorded, and released by early-December 1965. He suggests that the deadline could only have been met if the process had begun much earlier than October 12th, the generally acknowledged start-date for the recording sessions. But as the Beatles were filming and touring before then, he believes that session musicians were already in the studio laying down the instrumental tracks under the direction of George Martin. All the Beatles had to do to finish the recording was to add their vocals, a task easily accomplished within the time remaining.

This scenario raises a highly contentious issue. For Williams’ hypothesis to be true, all sixteen songs would have had to be written long before the Beatles arrived in the studio. As this would not have been possible based on the official timeline, he concludes that ghost writers were brought in to produce the material under the supervision of George Martin.