By J.P. Bruce April 07, 2020
As a young teenager I took the music I listened to for granted. I assumed that the quality of the great pop coming from Britain and America was normal, that it would continue to evolve in both complexity and appeal and yet remain accessible to my non-expert ear.

The Beatles’ “Eleanor Rigby” and “Tomorrow Never Knows” managed to combine musical experimentation with widespread popularity. Revolver, the album on which these tracks appeared, went straight to number one in the UK album charts on 13th August 1966. It stayed at the top spot for another six weeks. This success was replicated around the world. For instance, by the end of the year sales of the album exceeded 1m in the USA alone.

Heavyweight musicians and commentators saw the Beatles as elevating pop music into a new artistic form. Following the release of With The Beatles, William Mann, the classical music critic of The Times, acclaimed Lennon & McCartney as “the outstanding English composers of 1963”, even comparing them to Gustav Mahler.[1]  Quite a panegyric given that those giants of British music, Benjamin Britten and William Walton, both had major works published that year. 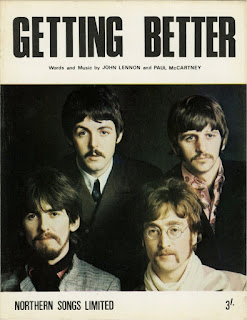 In 1967, Derek Jewell, jazz critic of The Sunday Times, described Sgt. Pepper’s Lonely Hearts Club Band as “a tremendous advance even in the increasingly adventurous progress of the Beatles”. They were, he argued, “using their unique freedom in the pop world to raise the levels of their idiom and enlarge its vocabulary in most exciting ways”.[2]

In a  TV documentary, also from 1967, composer Leonard Bernstein described pop music as “mostly trash”, but about five per cent of it, he asserted, “claims the attention of every thinking person”. He then sang the opening bars of the Beatles’ song, “Got To Get You Into My Life”, before proclaiming “that could almost be by Schumann; it’s so expansive and romantic”.[3]

While the Beatles were leading pop into ever-greater musical complexity, they were not alone. Other acts broke conventions without alienating their followers. These include Bob Dylan, Jimi Hendrix, the Beach Boys, and Pink Floyd. During the 1960s they all produced top 10 albums that broke the mould of what had been considered, until recently, mainstream popular music.

Boundaries were being breached in other musical genres as well. In the world of movie soundtracks the lush orchestral music of the Hollywood epic was giving way to the quirky, avant-garde sounds of John Barry, Ennio Morricone, and György Ligeti. The first two composed music especially for the big screen. The last, however, was a little-known composer of modernist classical music until Stanley Kubrick co-opted several of his pieces for the soundtrack of 2001: A Space Odyssey.

In previous posts, I have argued that Seán Ó Riada reconstructed and revived an authentic form of indigenous Irish music that competed with international pop. Nevertheless, like many musically-aware youngsters in Ireland at the time, I was excited by the new wave of what was increasingly referred to as “progressive pop” or “progressive rock”. To my ears, the new music, whether it came from Cream’s Wheels of Fire or Morricone’s score from For a Few Dollars More, seemed to open up a new world that was strangely exciting but also comfortingly familiar. Sometimes when I listened to a song like the Beatles’ “Lucy In the Sky With Diamonds”, I felt as if I had always known it.

Although at the time I simply enjoyed the fruits of the 1960s musical revolution as they appeared, the passage of more than half-a-century since then only emphasises how truly remarkable that brief period was. All the more so because the promise implicit in the Beatles’ song, “Getting Better”, faded so quickly. Instead of continuing to evolve in the same way that classical music had in the 19th century, or jazz in the 20th, the dynamic innovation - so characteristic of the best of 1960s pop - ended with the decade.