By J.P. Bruce March 24, 2020
In the early hours of Monday July 21, 1969, Neil Armstrong became the first human being to walk on the surface of the Moon. How do I know this? Because I saw him do it on live television. Just imagine. Live TV beamed into our home in Dublin from a quarter-of-a-million miles away. In 1969! Beggars belief, doesn’t it?

Two years earlier about 350 million TV viewers around the world watched The Beatles perform “All You Need Is Love” in a live satellite broadcast from Abbey Road Studios in London. So the technology existed to transmit live television pictures across the planet. But successfully carrying out a much longer broadcast from the Moon to the Earth was another matter entirely.

A host of concerned experts were against adding camera equipment to the already burdened Apollo space craft. However the US space agency, Nasa, insisted that the additional weight was justified if it allowed everyone to witness an historic moment as it happened. Nasa had long realised that an effective public relations strategy was critical to shaping public opinion and winning political support. Eugene Cernan, commander of the later Apollo 17 mission, called the Nasa strategy “one of the biggest marketing efforts in history”.[1] 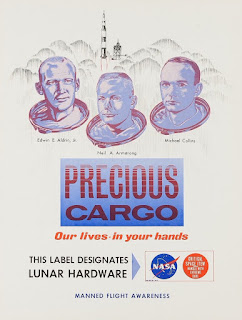 Through a carefully-designed media campaign, Nasa promoted its astronauts and their families as celebrities to be acclaimed and admired, just like the Beckhams today. Werner von Braun, architect of the rocket technology that enabled the Apollo program, understood why this strategy was necessary. He addressed the media on July 22 1969, just as Apollo 11 was heading back to Earth: “…without public relations and good presentations of these programs to the public, we would have been unable to do it.”[2]  For Nasa therefore, TV coverage of the moon landing was almost as critical as the mission itself.

Like hundreds of millions of people around the globe, the Bruce family kept the telly on for hours of live coverage, courtesy of our local broadcaster. It was not that the grainy black-and-white imagery, plus the soundtrack of beeps, squeaks, and radio chatter between Houston and the astronauts, made for gripping viewing. This was history, and we stuck with it so that we would not miss the important bits. The big moment came when Neil Armstrong manoeuvred himself down the steps of the lunar module and dropped gingerly to the ground. But not our ground, the Moon! Needless to say, we were glued to the small screen for that milestone, long after we should have been in bed. But school was closed for the summer so we could sleep late next day.

The Irish Times commentary reflected both the incredulity and the wonder felt by millions. TV critic Ken Gray wrote of the “unreality” of what he witnessed. “It is often difficult to believe”, he continued, “that what you are watching is not just another edition of Dr. Who.”[3] The paper’s leader writer referred to this “incredible time”, and marvelled at the TV images broadcast to the world: “…it was not the least of the wonders of the last twelve hours that a message as clear as a call across the street came down from the Moon to the Earth.”[4]  Seeing everything as it took place so far away only confirmed the magnitude of Nasa’s achievement. Ken Gray put it succinctly: “What would a flight to the Moon be without television?”[5]

The space agency had already been criticised for its inept management of basic radio communications. When Commander Gus Grissom participated in a rehearsal for the Apollo 1 launch at Cape Kennedy in 1967, he became impatient as he waited in the command module for instructions from the control centre. In the recording of the radio traffic from that exercise Grissom can be heard asking several times, “How can we get to the moon if we can’t talk between two or three buildings?” Later in the same test he and his two colleagues were killed when fire swept through the module.

This tragic event made it all the more important for the much more complex television broadcast from the Moon to proceed without a hitch. Clearly there could be no guarantees; the Apollo 1 rehearsal demonstrated that.

In those circumstances it would surely have been prudent for Nasa to prepare a contingency plan, just in case. That would presumably mean recording on film here on Earth a dress rehearsal of the landing, the footage to be used if the live relay broke down. The viewing public would be none the wiser.

No proof that it happened of course. But to quote Britain’s Master of the Rolls Lord Denning in a different context, for Nasa - and the US government - no TV pictures would have been “an appalling vista”.