By J.P. Bruce March 17, 2020
I was 10 years old when my mother took me to see John F. Kennedy. He was the first Catholic president of the United States of America, and of Irish stock to boot. Kennedy had been to Ireland before, but in June 1963 he made his only state visit as American president.

While he was in Ireland, Kennedy stayed at the American ambassador’s residence in the Phoenix Park. As it happened, we lived about 15 minutes’ walk from the park. Not having a car, and located in Dublin’s inner city, there was little for a young boy to do on a fine summer’s day. I was glad therefore when our family would make the short journey to the park, where we could feed the ducks swimming in the pond, and generally enjoy the wide open spaces. So my mother knew exactly how we could see the distinguished visitor in the flesh without too much effort.

The newspapers printed details of the route the presidential motorcade would take. Upon arrival in Ireland, Kennedy and his entourage were to travel from Dublin Airport along the quays to the ambassador’s residence. And so it was. On Wednesday evening, June 26th, Air Force One landed at around 8:00pm. Because it was just after the summer solstice it was bright until nearly 10 o’clock. So tens of thousands of people lined the streets to catch a glimpse of Kennedy as he passed by. My mother, my younger brother, and I found our spot near the park entrance and waited. 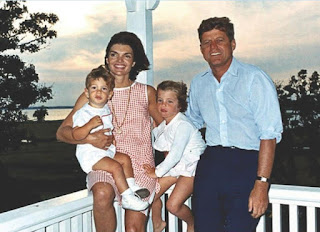 We had a good position on the footpath as the cavalcade approached and I could see everything clearly. The American president was sitting in the rear seat of an open-topped limousine. He looked relaxed as he acknowledged the cheers of the crowds gathered to greet him.  Alongside him sat the Irish president, Éamon de Valera. The contrast between the two men was stark. Kennedy seemed to represent the promise of the 1960s, a new era of glamour and fun. He looked like a Hollywood star - and he was so young! De Valera, born in the 19th century, was like an unwelcome reminder of Ireland’s past, austere and grim. Yet could anyone have imagined that the older man would outlive his younger counterpart?

Around this time we got our first television set. It was black-and-white of course and, because we did not have an aerial on the roof, there was only one station, Telefís Éireann. One Friday evening, less than five months after that memorable day in June, I was watching The Thin Man, an American drama series starring Peter Lawford, a brother-in-law of John F. Kennedy. The programme was interrupted by newsreader Charles Mitchel who announced that the American president had been shot during a visit to Texas. When the programme ended, the news came through that Kennedy was dead.

It may be difficult for anyone under fifty to appreciate the sense of hope that lifted the spirits of millions around the world as the Sixties dawned. That hope was based on a feeling that things were going to get better, and that the terrible wars of the recent past would never happen again. In his youth, his intelligence, and his charisma, John F. Kennedy embodied those dreams. That only made his tragic end in November 1963 all the more terrible.

The decade of promise would deliver more bad news as the years went by, whether it was the later assassinations of Kennedy’s brother and the civil rights leader, Martin Luther King, the escalation of the war in Vietnam, or the reversal of religious reform that the pope’s encyclical Humanae vitae seemed to signify. We did not know it then, but the killing of John F. Kennedy was the first sign that the longed for new age would turn out to be nothing more than a mirage.

Yet on that warm June evening, as I gazed at this smiling man who seemed to exude confidence in the future, it was possible to believe that we lived in the best of all possible worlds. So I will always be grateful to my mother for a wonderful memory of a more innocent time, when it seemed that spring had finally come.