By J.P. Bruce February 25, 2020
Seán Ó Riada launched his new ensemble, Ceoltóirí Chualann, in Dublin’s Shelbourne Hotel on 10 September 1961. What Ó Riada called a “folksy chamber orchestra” would turn his vision of Irish traditional music into reality. The membership was fluid and we cannot be sure who participated in that inaugural concert. But some or all of the following were probably involved. Apart from Ó Riada himself who arranged the music and played the bodhrán, the early line-up comprised Paddy Moloney (uileann pipes), Michael Tubridy (flute), Seán Potts (tin whistle), John Kelly and Martin Fay (fiddles), Sonny Brogan and Éamon de Buitléar (accordions), and Ronnie McShane (bones). 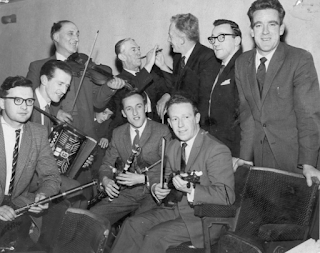 As harpist Gráinne Yeats reflected later, it was ‘the first group which presented solo players who remained soloists, yet also played together in a completely different way from ceilidhe bands’.[1]  Listeners were wary at first but generally liked Ó Riada’s new sound.  After one of their radio appearances a newspaper critic wrote:


…I soon became accustomed to the unusual combination and arrangements of the Ceoltóirí Chualann. It’s impossible to say whether Seán Ó Riada is immensely serious about his musicians, or is having an enormous joke. At all events, the experiment does succeed, the joke does come off.[2]

If this was to be Ó Riada’s home-grown alternative to international pop music, it can be seen in hindsight as a pre-emptive strike. On the very evening that Ceoltóirí Chualann made their live debut, a little-known English rock ‘n’ roll group called the Beatles were performing at Liverpool’s Casbah Coffee Club. Twelve months later, almost to the day, they recorded their first single, “Love Me Do”, at EMI’s studios in Abbey Road. For the next eight years the revivified pop culture they led conquered the world. Meanwhile through their concerts, records, and radio programmes, Ceoltóirí Chualann were fostering a new pride across Ireland in a quite different type of music - a sense of pride already ignited by Ó Riada’s orchestral score to George Morrison’s documentary, Mise Éire.

Both the Beatles and Ceoltóirí Chualann lasted only as long as the decade. The English group’s swansong, Let It Be, was released on 8th May 1970. Seven months later, on December 3rd, Ó Riada announced (in another Dublin hotel, the Hibernian) that ‘My experiment is finished’. And so Ceoltóirí Chualann was disbanded.

Seán Ó Riada loved good music wherever it came from, Europe, South America, or the Middle East. On the other hand he hated the kind of commercially-driven pop that became all-pervasive during the last decade or so of his life. In 1971, as he lay dying in a London hospital, he was tormented by the incessant pop music that the nurses listened to all day on the radio. Almost a decade earlier, not long after he had formed his folk orchestra, he argued fiercely for an indigenous Irish culture that would counteract what he referred to as ‘an alien materialism’.


Our nation, that was bought with blood, is being sold, spiritually as well as physically, before our own eyes, by our own people… The strongest surviving tradition we have is our music. We must not let it go. And it is up to ourselves to keep it.[3]

And keep it we did. Not only did the Ceoltóirí Chualann sound go down well with the listening public, it inspired new generations to explore their own culture. Traditional Irish music took off in the late-sixties and seventies as musicians like Paddy Moloney, Donal Lunny, and Jim Lockhart developed and expanded Ó Riada’s vision with their own groups, the Chieftains, Planxty, and Horslips. In 1987 a three-day festival to honour the late composer featured the Ó Riada Suite, the first orchestral work by Bill Whelan who later gained lasting fame with Riverdance. And the extraordinary creative genius that Ó Riada displayed continues today in the music of the Gloaming, whose experimental arrangements of ancient airs and tunes would have delighted him.