By J.P. Bruce February 04, 2020
The pop music revolution of the 1960s, spawned in Liverpool and London, spread quickly around the globe. In Britain and the USA, in particular, groups such as the Beatles and the Beach Boys began to change the face of modern music through their own highly inventive and original material. Ireland, as a minor appendage to the larger English-speaking world dominated culturally by these two countries, should have succumbed quickly to this potent new musical form. But we didn’t. In these articles I explore why the pop juggernaut was at least slowed down when it hit our shores. 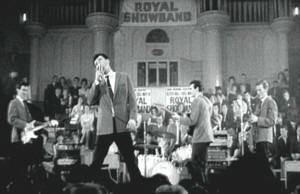 Although local bands, such as Them and Taste, enjoyed some success with their own songs, there was no huge upsurge of original pop talent such as could be found in our larger neighbours. Instead Irish audiences were content to enjoy the international hits of the day through the filter of their favourite showbands. Showbands were essentially slimmed-down versions of the big bands of the 1940s and 1950s. Those fronted by a charismatic singer, such as Brendan Bowyer or Dickie Rock, attracted huge crowds to dancehalls and ballrooms throughout the country. But, with few exceptions such as the Freshmen from Antrim, showbands contributed little creatively to the imported fare they peddled in their heyday. None produced songwriters remotely equivalent to Ray Davies or Jimmy Webb, or recordings to match Rubber Soul or Parsley, Sage, Rosemary and Thyme. Whatever creative spirit was unleashed in young Irish hearts and minds by the cultural renaissance unfolding off-shore, it was not to be found on the showband scene. Instead it took root in what could be described as Ireland’s musical heritage, a heritage largely ignored by those eager to jump on the pop bandwagon.

During the 1950s and early-1960s, many people listened to Irish music in the forms presented by singers and groups such as Bridie Gallagher and the Kilfenora Céilí Band. Through the use of easy-listening orchestral accompaniments and simple three-four tempos, Bridie’s records, such as “The Boys From the County Armagh” and “Moonlight in Mayo”, were mega-hits at home and abroad. Céilí bands, such as the Kilfenora, used piano and snare drums to beef up their repertoire of traditional tunes and make them danceable for their fans. But even back then, Irish music was broad enough to also encompass pipers such as Leo Rowsome and sean-nós singers like Joe Heaney. Their music evoked an almost-forgotten Ireland that sounded strange and exotic to the modern ear.

However it would be wrong to regard one strand of Irish music as less genuine or pure than another. If history has taught us anything it is that Irish culture is a mixum-gatherum of many influences, not only from the ancient past but from more recent sources, such as the Italian baroque and the Broadway stage. We live on a small island that has been visited over many centuries by friend and foe alike, and all have left their mark. But five or six decades ago it would have taken a rare genius to see how the various strands of Irish music could be brought together in a new form that would inspire and excite those who heard it. Wasn’t Ireland fortunate to have just such a prodigy ready and willing to take on the task?
Cuid 2 >