By J.P. Bruce January 28, 2020
The summer of 1968 left three indelible marks on my fifteen-year-old mind. After hearing of the shooting of Robert Kennedy I went out into our back yard. Using a magnifying glass to focus the sun’s rays, I burnt the date, 6/6/68, into a wooden slat on the side of the garden shed. In July I took the bus into town to see 2001: A Space Odyssey at the Plaza Cinerama. I was so awe-struck by the film I went back to see it twice within a fortnight. Then in August I heard “Hey Jude” for the first time.

I was, of course, aware of the Beatles before I heard their new single on the radio. A few years earlier, on another visit to the cinema with my father, I had seen them perform “She Loves You” in a colour film of one of their concerts. Whether it was the sight of Paul and George shaking their mop-tops while they “oohed” loudly into the microphone, or hearing those closing “Yeah, yeah” harmonies, I was left giddy with excitement. By 1967 I was interested in the opposite sex and went to my first dance, a chaste affair run by the Legion of Mary. But my attention was drawn away from the phalanx of pretty girls across the hall by the undanceable music coming from the sound system. Rather adventurously, the DJ had flipped the Beatles’ hit, “Hello Goodbye”, to play the B-side. I stood transfixed by the slow pounding rhythm and strange lyrics of “I Am the Walrus”. It was both exotic and profound, or so it seemed at the time. You might think that this background would have prepared me for the wondrous “Hey Jude”, but it didn’t. 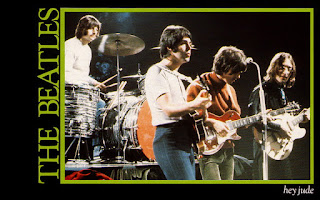 It was a warm afternoon and I was home alone during the long summer break from school. When the record finally ended I was in a state of disbelief. How could a Beatles’ song turn into something else just when I expected it to fade? And that “something else” went on and on, like a hypnotic mantra.  It felt as if I were on a trip through interesting if familiar territory, when suddenly I was brought into a strange new world - never to resume the original journey. I had no words to express the emotions churning around inside me. But I needed desperately to share the experience with someone who might understand. So I left the house to find a kindred spirit.

I had no plan and no idea whose path I would cross. But almost instinctively I walked in the direction of a friend’s house about ten minutes away. I had no intention of knocking on his door but I kind of hoped I would meet him coming in the opposite direction. Perhaps he had been listening to the same programme and was similarly enraptured by the new Beatles’ song. But I did not see him and eventually I went back home without ever expressing to another soul the wonder I had just encountered.

I still find myself mulling over that summer day in 1968. Maybe all teenagers feel things as intensely as I did, whether half-a-century ago or today. But could it be more than just a case of an impressionable youngster reading too much into a trivial moment? Was there something special, something different, about the 1960s? Something that has turned our society in a different direction to the path it was already on? Just like that long coda in “Hey Jude”?